William Everett: Coffee With the Poets

William Everett gave us a thought-provoking and thoroughly enjoyable reading and commentary about his poetry at our last Coffee With the Poets at City Lights Bookstore on August 19. Bill is both novelist and poet and a former professor of Ethics and Theology. He is fluent in German (he's done translations) and Lord knows what else. He's mostly fluent in poetry, however, and we were delighted to be able to welcome him to Sylva. After the reading several of us retired downstairs to Spring Street Cafe for lunch and a casual poetry workshop around the table. What could be better than good food and poetry? 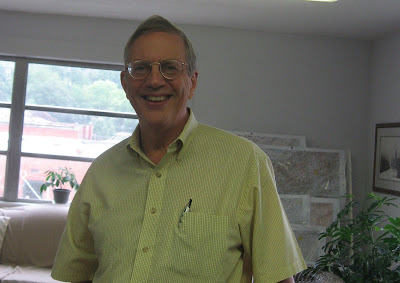 Bill was waiting in the Regional Room of City Lights Bookstore. 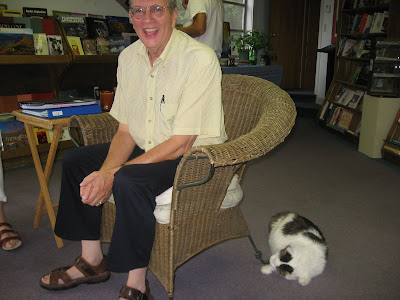 We were immediately joined by Charlie, the Bookstore Cat! 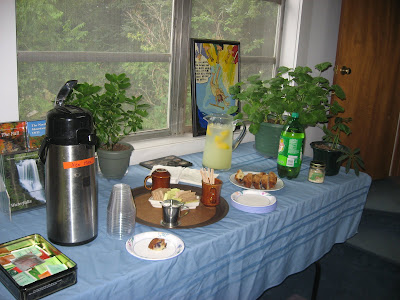 Food, glorious food! Muffins, cookies, coffee, lemonade, and so on. 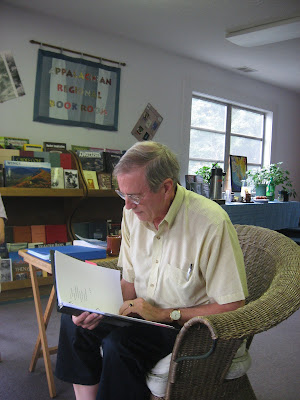 Bill organized his presentation around his journey as poet. His earlier poems showed his ear for the sounds of language and the influence of poets whose work he has admired in the past. He is clear about how the poetic tradition guides and instructs us as we write our own poems.
The following are some early poems he read. To read more about Bill, go to his website www.williameverett.com.
Rusted roofs
---where children played,
Graybeaten boards
---engrained with laughter,
Christmas pines in morning
--drape the walls
---in shadow calico.
The sun bakes down
--the flower patch,
A puppy hushed in memory
--underneath the porch.
Old folks whisper in the weeds,
--it was not so,
--it was not so.

Round red lips pubaceous
Smile in the glossy of the party
Frozen on the yellowing page,
A sentimental daiquiri
Of tender expectations.
How, with whom and where
Will teasing eyes find their reflection?
Who will find the woman
In the girl in the taffeta gown?

if
in tinseled tear
you pray the evergreen upon us,
supplicate the lavish laughter of your heart
to snow upon the muddy traces of our mind. 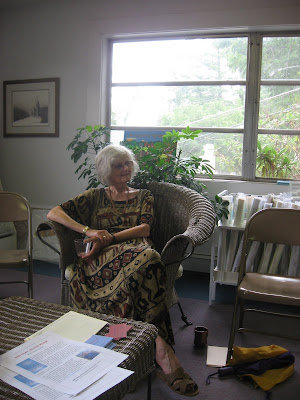 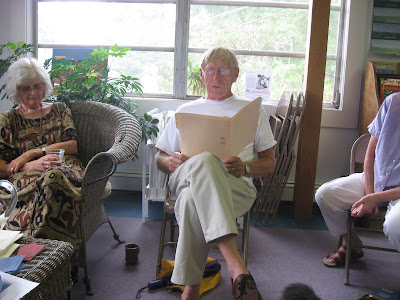 After Bill's presentation, Newt Smith read some new poems. We continued our comments on his work at lunch.

Dianna Jurss, below, on the left, will be the featured poet in September. 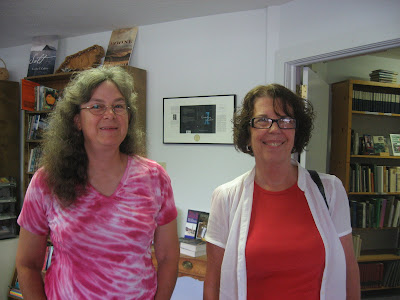 IF ARE IN THE AREA, PLEASE JOIN US ON THE THIRD THURSDAY OF EACH MONTH FOR COFFEE WITH THE POETS AT CITY LIGHTS BOOKSTORE IN SYLVA, NORTH CAROLINA. PHONE: 336-9499. WEBSITE: WWW.CITYLIGHTSNC.COM.
Posted by Kathryn Stripling Byer at 9:21 AM 4 comments: 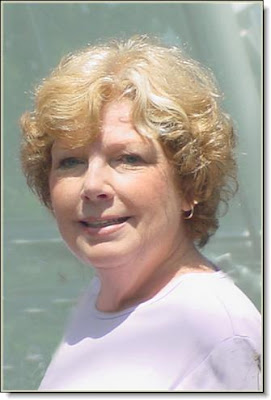 When Mary Mike Keller read her poem "As the Deer" at our Gala Publication party for Echoes Across the Blue Ridge, hosted by City Lights Bookstore two weeks ago, I was swept away. It's a beautiful poem, and she read it beautifully. This poem is yet another reason to own a copy of Echoes. Go to the Echoes page on Facebook and take a look. Or the Netwest blog. You will find information on how to purchase the book.

as the pick grazes across strings

as the deer across the glade

My thumb under f sharp mimics

her tongue curled to pluck

a blade intoned on b

Quietness slides along her body

my finger descending the string

in a smooth slur of music

The sweetness of the melody

in the lea of my instrument

for that last unfettered fret 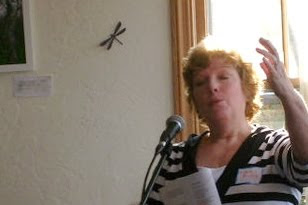 Mary Mike reads her poem at the Gala event. 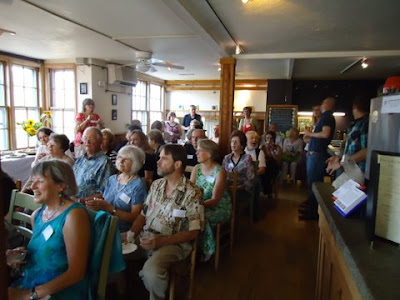 Posted by Kathryn Stripling Byer at 9:10 AM 3 comments:

COFFEE WITH THE POETS: WILLIAM EVERETT 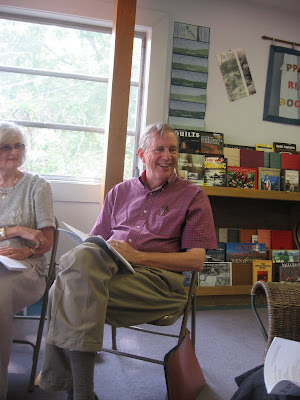 (William Everett at the July Coffee With the Poets)
On August 19 City Lights Bookstore will welcome poet and fiction writer William Everett as guest. Bill is a Netwest member, the author of eight books and many poems. He will read and talk about his journey as a writer, his creative process, and engage participants in their own ways of accessing their voices. The event will take place in the Regional Room of City Lights at 10:30. After a break for lunch, there will be a two hour writing workshop at 1:30. Participants should bring copies of one poem or excerpt of prose for discussion.
Bill maintains a website (www.williameverett.com) which I highly recommend visiting. Here is his announcement of his visit to City Lights next week. You will have to go to his site to read the second poem!

On Thursday, August 19, I will be reading and reflecting on my poetry at 10:30 am for the “Coffee with the Poets” group at City Lights Bookstore, Sylva, NC. The poet’s group is just one of several under the umbrella of the Netwest Mountain Writers, affiliated with the North Carolina Writers Network. (Check outwww.netwestwriters.blogspot.com.) We are convened by Kay Byer, a former NC Poet Laureate, who has graciously encouraged me to reflect on my thirty years of often hidden poetry writing. As I have been reflecting on this welcome task, two poems popped up that I thought I’d share with you. They both involve the quirky, unexpected way that poems elude our normal patterns of perception and expression. I thought you might enjoy them.

I Love That Poetry

Oh yes, he said. Last year I went to see a poet

Maya Angelou and she was beautiful.

The curtain opened and the spotlight lit upon her hair,

not white, but lustrous gray.

She wore a long crushed velvet dress, much like a kaftan,

embroidered with a band that looked like kinte cloth.

A long string of pearls draped down from her broad shoulders,

picking up the highlights in her hair.

as she sat down among them.

Oh, it was gorgeous. I just love that poetry.

I’m glad you liked it, passed my lips. Perhaps you might cut off a little more

above my ears. I want to look my best tomorrow night.

Posted by Kathryn Stripling Byer at 8:59 AM 3 comments:

The muslim holy month of ramadan (http://www.holidays.net/ramadan/)begins tonight at sunset, and i can think of no better way to honor the time than posting a ghazal by the late Kashmiri-AMERICAN poet Agha Shahid Ali. after the assaults on islam that we've heard in our media and swirling around cyberspace, the image of god weeping in one's arms tonight leaves me moved to silence. Perhaps silence is the best way to respond to this poem, a long, listening silence. ( I send my Ramadan greetings to Fatemeh and Debbie's Hassan.) More about the poet follows his poem.

Pale hands I loved beside the Shalimar
—Laurence Hope

Where are you now? Who lies beneath your spell tonight?
Whom else from rapture’s road will you expel tonight?
Those “Fabrics of Cashmere—” ”to make Me beautiful—”
“Trinket”—to gem—“Me to adorn—How tell”—tonight?
I beg for haven: Prisons, let open your gates—
A refugee from Belief seeks a cell tonight.
God’s vintage loneliness has turned to vinegar—
All the archangels—their wings frozen—fell tonight.
Lord, cried out the idols, Don’t let us be broken
Only we can convert the infidel tonight.
Mughal ceilings, let your mirrored convexities
multiply me at once under your spell tonight.
He’s freed some fire from ice in pity for Heaven.
He’s left open—for God—the doors of Hell tonight.
In the heart’s veined temple, all statues have been smashed
No priest in saffron’s left to toll its knell tonight
God, limit these punishments, there’s still Judgment Day—
I’m a mere sinner, I’m no infidel tonight.
Executioners near the woman at the window.
Damn you, Elijah, I’ll bless Jezebel tonight.
The hunt is over, and I hear the Call to Prayer
fade into that of the wounded gazelle tonight.
My rivals for your love—you’ve invited them all?
This is mere insult, this is no farewell tonight.
And I, Shahid, only am escaped to tell thee—
God sobs in my arms. Call me Ishmael tonight.
---------------
Agha Shahid Ali was born in New Delhi, India in 1949. He grew up in Kashmir, the son of a distinguished and highly educated family in Srinagar. He attended the University of Kashmir, the University of Delhi and, upon arriving in the United States in 1975, Pennsylvania State University and the University of Arizona. Though a Kashmiri Muslim, Ali is best known in the U.S. and identified himself as an American poet writing in English. The recipient of numerous fellowships and awards and a finalist for the National Book Award, he taught at the University of Massachusetts-Amherst, Princeton College and in the MFA program at Warren Wilson College. At the time of his death in 2001, Ali was noted as a poet uniquely able to blend multiple ethnic influences and ideas in both traditional forms and elegant free-verse. His poetry reflects his Hindu, Muslim, and Western heritages.
If the hate-mongers among us could sit down quietly and read Agha Shahid Ali's poems, they might come to the sort of profound "opening" of mind that only art can provide.

Posted by Kathryn Stripling Byer at 6:56 AM 9 comments: