WORDS SHINING IN THE NIGHT 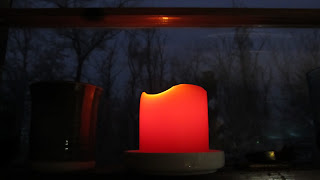 Words Shining in the Night
By Kathryn Stripling Byer

Nothing brings our language into brighter focus than religious holidays. As we gather to
hear the words of this holiday season, we have lately become more aware of how those
words can both bind us together and push us apart. Just last Christmas, there was an
uproar over greeters at various stores using Happy Holidays instead of Merry Christmas,
as if the former somehow diminished the latter. Yet, many Americans do not celebrate a
traditional Christmas and many others do not celebrate it at all. Some, like certain Native
American tribes, never have, welcoming the solstice instead with their age-old earth-
based rituals.

So, what to do in our increasingly pluralistic society, where Latino, Arabic, African, and
Asian voices are joining our own? Can we agree at least on the meaning of this yearly
turning, that it pulls us back into the light, if we let it? And that the light can bring us
together, if we let it?

Perhaps learning some new words for light would be a good place to start. Tara, for
example. We English speakers think of Ireland and Scarlett O’Hara’s plantation. But the
word is also Urdu/Hindi for star, descended from the Sanskrit for “shining.” And this
time of year the star shining in the night carries special significance. In Spanish it is the
beautiful word estrella, and in French, etoile. The German star rings in the season as
stern, whose light cuts through the darkness and leads the way to revelation. In Arabic,
the haunting word shihab means flame. How can we deny this light shining in the
darkness, regardless of which word a culture uses to say it? We all light our candles this
time of year and watch the flames dance in the night.

I like the word shihab because it is the given name of a poet I admire, Naomi Shihab
Nye, American-born daughter of a Palestinian journalist and an American Montessori
teacher. For years she has worked to bridge cultural and religious differences, to heal the
divide that keeps us from being able to communicate with one another. Her voice shines
like a candle flame in this season’s dark night of suffering and war.

Her poem “Red Brocade,” begins: The Arabs used to say,/When a stranger appears at
your door,/feed him for three days/before asking who he is,/where he’s come from,
/where he’s headed./That way he’ll have strength/enough to answer./Or, by then you’ll be
/such good friends/you don’t care.

Let’s go back to that, she pleads in the line that follows. No matter the language used, this
time of year we call out to light, not only to the flame of the sun returning to our
hemisphere, but also to the light of understanding. This season challenges us to believe
that our words for that light matter. Call it luz, lumiere, shihab, or tara, it means the same
thing: the realization that we are called by the light to live together in peace.

What a great gathering of women in this anthology edited by Celia Miles and Nancy Dillingham!  And what a great Christmas gathering of several of those writers at the Coffee with the Poets at City Lights Bookstore this past Thursday!  We nearly had standing room only, and I can't credit the Milky Way Cake of my Piece of Cake Laureate poem fame, though the plate was clean by the time we left. The credit belongs to these writers and the two savvy editors who put together a diverse group of voices from 50 Western North Carolina Women Writers. 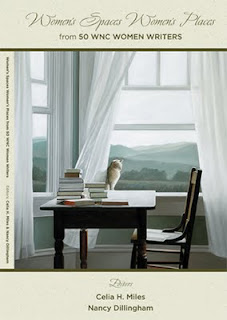 For a wonderful post about this anthology, please go to Kaye W. Barley's fine blog, Meanderings and Musings.   Here you will find information for ordering this book, as well as details about the cover artist and the editors. 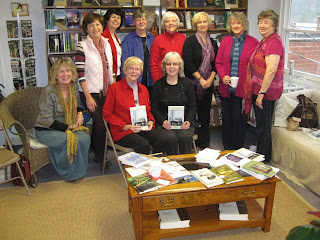 Celia and Nancy asked me to begin by reading Peg Rhodes' poem, which I was happy to do, finding it moving and oh so resonant at this stage in my life. Peg was unable to be with us.

I am older and wiser now.
I have climbed to the peak
Of Transition Mountain
Where footing is rocky and sharp
And the downward view
Is perilous and real.

Courage, my heart, as you scan
The lonely panorama of Aging.
Make the careful descent
From denial to acceptance
Aware of the wild flowers
Peeping from the crevices.

Adjustment is the order of the day--
And the long nights.

***Peg Rhodes, political activist and humanist, has written poems most of her life.  At ninety, she continues to write and publish. 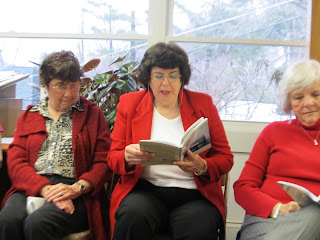 Janie Mae Jones McKinley reads from her selection,  "On Bear Mountain."  We could all go with her as she remembered walking with her grandfather to Naybin's general store, the aromas of onions, hoop cheese, fertilizer, and oiled wood floors filling our imaginations.  And candy!  She had even brought small bags of old-fashioned penny candy to give to each one of us. 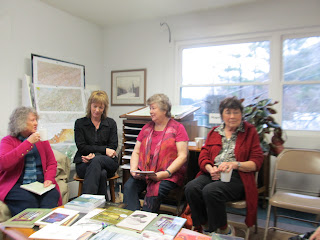 JC Walkup chats with Glenda Beall before the program begins.  J.C's towel buying saga left us laughing like school girls, while Glenda's moving poem about her grief after the loss of her husband left us hushed. 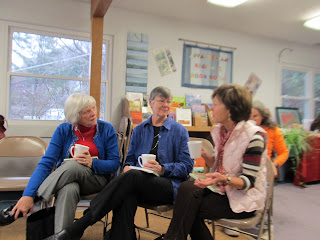 Martha O'Quinn, Marian Gowan, and Beth Moore get caffeinated before Celia and Nancy begin their introduction.   Martha's poem gave us imagery to carry home, as good poetry always manages to do.  Marian, a quilter, described a special quilting retreat on the NC coast. (Maybe I should finally take up quilting before it's too late!)  And Beth's lovely recollection a trip to Kenya captured the spirit of the season in a profound and lyrical way.

Jennifer McGaha's "Vampire Run" was hilarious and expertly crafted.  But don't take my word about how good these poems and stories are.
Over the next few days I'll be posting them, or excerpts,  to highlight  that morning's celebration of mountain women's voices.  Keep dropping by to read them.
And order the book for Christmas, if you haven't already.    It's not too late!

I am in SW Georgia today for the annual Campbell family Christmas reunion.  This tradition began decades ago when my grandparents, Carrie Mae and Ulmont Campbell, gathered all their children and grand-children together on Christmas night for supper and gift-giving.

My grandmother always had a chafing dish of melted cheese with a wreath of crackers encircling it to the side of  the large dining table where ham, turkey, bread, and numerous accompaniments waited.  On the buffet table sat various desserts.  Coconut cake, my grandfather's favorite, lemon-cheese cake (does anyone make this anymore?), divinity, pound cake, and goodness knows what else!
After my grandparents died, the family kept the tradition alive over the years.  The family has grown, of course, with numerous great grandchildren, and great-great's!  Two women were missing this year, though--my aunts Carolyn and Mary, leaving my mother as  the surviving child of Carrie Mae and Ulmont Campbell.   I took these photos during the last Christmas reunion at which all three sisters were able to be together. 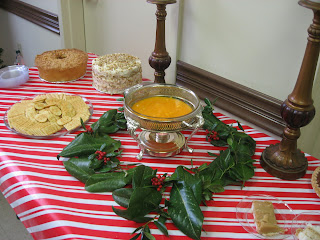 The traditonal melted cheese, surrounded by crackers and cakes. 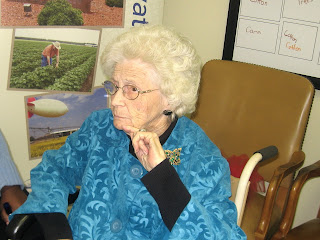 This is the last photograph I have of my Aunt Mary, who was a black-haired beauty when she was young.  She always had a flair for wearing bright colors, as you can see from this turquoise tunic.  Her hair had turned a beautiful silver in her last years.  She died on our  traditional New Year's Eve last year.
Although my poem below is set on All Hallow's Eve, it captures how I felt today at the Campbell reunion, remembering the faces of my gone family members.

and time slides like silk
against silk.
Easy to get lost
in letting go
this time of year.
Lost letters.
Lost  memories
Lost copper
earrings a  friend
gave me.
Split Silk,
I haven’t forgotten
the name
of that church
on the far side
of home ,
how it rose
from the roadside,
a hymn to the landscape
I passed through
where pumpkins
lay stacked beside fields
like the kindling
my ancestors gathered
for bonfires
on All Hallows Eve
when the veil
between seen
and unseen trembles
sheer as silk
through which
we might, if
we come close
enough, see
the other side
waiting for us
as a mirror waits
to be filled
with  the bright
face of forever.

from  Coming to Rest, LSU Press

Posted by Kathryn Stripling Byer at 11:53 AM 5 comments: