The Flint River surges along its journey a mere three miles from the farm where I grew up.   The town of Newton, Georgia lies along its banks and the old Newton Bridge used to be the object of great trepidation when we would drive over it.  One-lane and ramshackle (or so it sounded) it always caused us womenfolk to worry that a truck would come our way and force us into the muddy depths.  "Don't look down," my mother would warn.  What might we see if we did? 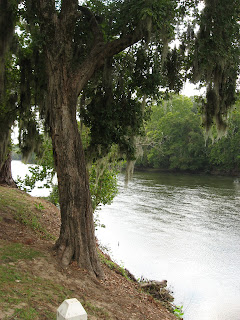 This poem, in the ancient Persian form of the ghazal, explores that obsession with the river.  The first in  a series I hope to write about the Flint, it introduces some of the obsessive imagery I've carried with me over the years.  This poem appears in the current Pembroke Magazine.

When  she lowers her hands to the river
she feels many dead voices translating river.

Her fingers turn cold, but her lips part,
as if, like a hooked  fish, she longs for the river.

Don’t look down, her mother warned; shifting
the Ford into second gear, crossing the river.

The drawbridge’s rusty spine still rattles
memories she tries to dredge from the river.

Old men cast their histories into the depths
she can’t reach.  Stories keep shape-shifting over the river.

The trees keep their roots to themselves;
but they let their reflections be stroked by the river.

When she hears the cricket frogs singing,
she wants to lie down on the banks of the river.

Come night she hears voices.  A drunken brawl.  Somebody
cursing the day he was born.  Somebody trying to drown in the river.

The backwater nags at her.  Dare she strip
down to the bone and walk barefooted into the river?

Posted by Kathryn Stripling Byer at 5:33 AM 3 comments: 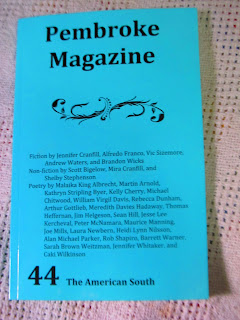 The new issue of Pembroke Magazine is fresh off the press, focused on the American South and edited by Jennifer Key, herself a rising young poet with many accolades to her credit, including a prize from Shenandoah, one of the country's most celebrated literary journals.  I hope to feature her work eventually on this blog.

Jennifer asked me to send her some poems for this issue, which I was happy to do.  The following piece had its beginning twelve years ago while I was at the Hambidge Center in north Georgia.  I had brought stacks of journals I'd kept, filled with drafts of poems in handwriting I often could no longer read terribly well.  I pulled a few lines out from my scribbles, typed them into a disk on my ancient Mac, and proceeded to forget them.  This spring I pulled them out again and completed this poem.

I grew up reading my father's weighty books on the Civil War, haunted by the photographs of soldiers and battlefields, memorizing descriptions of the battlefields.....Shiloh, Antietam, Gettysburg.  At the center of my fixation, though, was Sherman's march through Georgia, branded forever into my memory by Gone With the Wind.  I wrote at least three poems about that experience, one entitled " Seeing GWTW for the Sixth Time," an obsession halted, I hope, by the the last GWTW poem I will ever write (I hope) titled "Gone Again."  This poem comes at the subject of William Tecumseh Sherman from another angle.     War is still hell, and we have only to look at our latest battlefields in Iraq and Afghanistan to see the wasteland it creates, the scorched earth approach that Sherman practiced so well.

From a Safe Distance

“War is hell,” Sherman said,
torching his way from Atlanta
to the port of Savannah,
with God knows how many
small towns left burning between.
But tonight who’d believe him?
This new war’s a video game.
Push a button.
Just look, we are winning,
the missiles on target,
the clean zap of
bombs hitting bulls-eye!
A child’s game
for overgrown children.
A genius,  that S.O.B. Sherman,
he knew, once a war has been turned loose,
it goes where it bloody well pleases.

Growing up, I found war
in the pages of Civil War volumes
my father collected.  Photos of Stonewall
and Lee, the lost faces of 15 year olds
and the corpses at Shiloh seemed more real
than counterparts snapped during D-Day
or, later, the peasants
littering a road outside My Lai.
Back then war was a book
I could open or close when I wanted
and draw from a safe distance
its inevitable conclusions.

No photos tonight of the slain
on my television screen,
no houses scattered like book pages
ripped from their spines,
but soon we’ll see leakage of bodies
blown into a digitized rubble by pilots
who speak with an accent I understand,
down-home and commonsense.
Do what you have to do.
Lock on those suckers
and bring them down.  Sherman
would be pleased, the streets burning,
nothing much left of another small town. 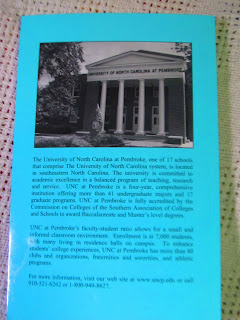 Posted by Kathryn Stripling Byer at 6:24 AM No comments: