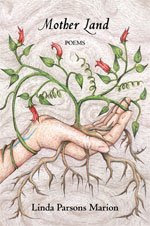 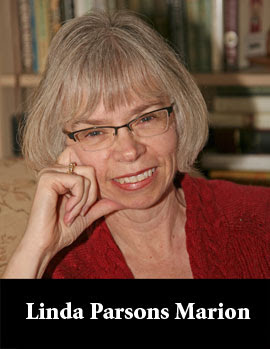 I've known Linda Parsons Marion for many years. She is the wife of poet Jeff Daniel Marion, and the two of them make a pretty good poetic team. If you are looking for a strong, earthy book of poetry for yourself or family and friends during the winter season, this one is a winner. Go to the irisbooks.com site to find out how to order, or, better yet, order from your local indie bookstore.

As for which tea to drink while enjoying these poems, any suggestions? Something like Blackberry Sage, perhaps, or Good Hope Vanilla.

I believe in the bicycle of forgiveness, the potholes
barely missed and jarred over, stickiness of new-laid tar
sucking my speed to a crawl. I believe in silver spokes,
unswerving wheels bouncing me along, though the way
forward is fogged in false hope. I believe in the way—
that if souls are reincarnated, I chose you for my mother,
chose the rutted road we’ve traveled/travailed, chose
the misfiring in your head, manic/depressive charge
that drove me through Alice’s looking-glass, under quilts,
behind chairs until stormclouds lifted. I believe in gravel
slung, wedged in my Keds, for limping and bruised I can
salve others’ woundedness, pick the rocks from their knees.
I believe in highways simmering ahead like heated lakes,
mirage of reconciliation near enough to imagine. I believe
in roadside angels: grandmothers, aunts, friends, a stepmother
who rescued strays from traffic, raised me without blood
boundaries. I believe in torque, the physics of angle and altitude,
in slamming the pavement to make time, knowing in my heart
of hearts forgiveness has no schedule, no map, no AAA
triptych. I believe in the small bell, the night’s music hushing
my child’s fears that fifty years have not extinguished. I believe
in the night, haunts heard only by the misbegotten, for later
comes the peach morning. I believe in the fickle wind renewing
my hair and ears, its shifting horse latitudes and rainbow
arch. I believe in the endpoint lowering its heavy barricade,
in your faith’s Savior waiting to pick you like a field flower,
your goodness reborn. I believe I will stand at the opened earth
and grieve for the wasteland we’ve ridden far and wide,
light slanting on hills we never stopped to admire. I believe
grace will carry us there if we lean into the hairpin curves,
pedal hard, in life or after, beyond the blue rise.

The relatives wrap leftover turkey and Derby Pie,
my mother hands out photographs of herself at twenty.
Surely my father, training for the Air Guard at Ft. Sumter,
snapped her on the beach towel: one leg coyly bent,
palms flat to accentuate her bust, that coveted Coppertone
glow of 1952. A flutter in her womb, I am the ticket
to duty stateside, those unlucky boys dogfighting
in bitter skies over Korea’s 38th parallel. See,
she has written on the back, I was young once too.

Sleek and gilded in Carolina heat, surely her high school
sweetheart would never cheat with a Kappa Delta
nor stand before a judge and beg her to stay his wife.
Nor would she run from husband to husband, mistaking
the second for savior, burning down to her frosted toenails
for a third. No daughter of hers would cry for a different
mother, pack a suitcase to live in her father’s house,
their ties bloodied and broken. No, her mind would not
roar like the downing of MiGs, nor drown the wreckage
in Percodan or Darvocet, the sting of their going
and going mirrored in the fierce surf.

This blinding day, her bones are hard and buttermilk
fed, unbuckled to feebleness and osteoporotic ruin.
Her breasts, jaunty enough to turn heads, unburdened
by cancer, not yet a lunarscape cratered by the scalpel.
From a nowhere street in east Nashville, she has traveled
to this brazen sun and broad shore. On sugary sand,
in the singular compass of my father’s sea-blue eyes,
she cannot believe her luck.

The Name of the Place

At the low-slung altar of her Magnavox console, I bowed
to their greatness, the ministers of my stepmother’s music:
Louis Prima and Keely Smith, Roy Orbison, Joey Dee
and his Starliters, Mancini and Lanza. I jumped to their jive,
their strings and hangdog vibrato, popped my hips
to the peppermint twist. I wanted to be the pulse of bass
thumping, the verve of I like it like that. Whatever cool place
the beat sent her, I was the metronome tocking at her heels.
Dizzy and tuneless from my mother’s discordance,
I wished myself into the turntable and scratchy revolutions,
into my stepmother’s rouge and pancake makeup, fingers
snapping Sweet dream baby, how long must I dream?
The records spun dreams of waking her blood daughter,
with sapphire eyes and cucumber skin, our separateness
drowned out, our pitch pure as belonging.
Posted by Kathryn Stripling Byer at 5:54 AM

Oh my, these are lovely~

Linda has such a lovely and distinctive voice. Good stuff.