We met my brother, his wife, and a couple of their friends at O'Malley's last night for drinks and supper, while watching numerous football games on the televisions all around us. We cheered when Clemson beat Miami--the whole restaurant cheered, for that matter. The Auburn fans were downcast over the LSU game. As we were preparing to leave, I saw that my sister-in-law had left a plate full of chicken bones from her meal, so I asked her for them.

For stock, I replied and shamelessly wrapped them in a paper napkin.
And so this morning I have boiled them down to stock and am making a big pot of gumbo. 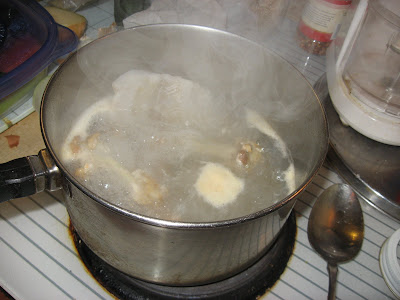 First the roux, oil and flour in my cast iron pot, heated to a nice brown color, then the peppers and onions, letting them turn a bit soft and savory looking, after which I add the leftover crabmeat in my freezer, the frozen tomatoes from our few in the garden, some chipped barbecue, broughr back from S. Georgia, and catfish. Oh yeah, good ole catfish.

I've just added the exceptionally good looking okra I found at the market, and before supper, I will add the shrimp, though I've already immersed a few with tails on for flavor. 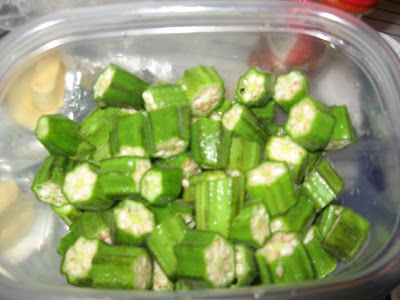 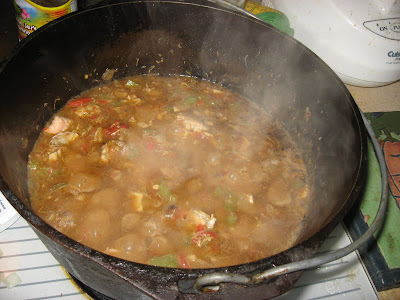 Then I'll let it sit for the afternoon, the flavors mingling in all sorts of magical ways. Just a slight re-heating, and we'll have it for supper, maybe with some cornbread or Annie's Bakery baguette.

For dessert, maybe a cherry pie. We'll see.
Posted by Kathryn Stripling Byer at 8:37 AM

Man, you made me hungry, Kay. Sounds like you are an expert on cooking gumbo. My sister made a simple version of it when I was with her recently and I had to have two bowls. The only thing missing with her dish was the cornbread. It really calls for cornbread.
I like your photos also. You might give Sam some competition with these recipes.

Yummmmmm! Never thought to add BBQ, but what the heck? It's all good down in da gumbo pot. :)

My kind of cooking! In fact, that looks like my big cast iron pot which has been a fixture in my kitchen roughly forever.

A good time for gumbo with these cooler days.

Down in da gumbo pot all sorts of transformations happen! My mother sent a Boston butt (smoked) back with me in May and after spending enough time in the freezer, it was ready for some fun, so why not chip some of it to put in the gumbo with the shrimp and crab meat? It's added a wonderful smoky flavor to the gumbo.
Glenda, I don't think I'll give Sam any competition ever! I just like to mess around in the kitchen. I hardly ever use recipes anymore.
Yes, Vicki, I've had this poet a long time. It reminds me of the one my grandmother used. And her "spider" that she fried her hoecakes and griddle cakes (pancakes) on.