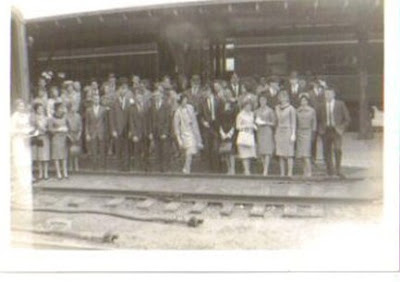 I found this old photo during one of my last trips home. Do those of you of a certain age remember "senior trips" to the Big City? They were deleted just a few years after my class trip to Washington, DC and New York City. Classes still have such trips but often they are cruises, like the one my daughter's class offered and which she declined. Being on a train with classmates some of whom you may dislike can be hard, but a boat? Getting seasick? No thanks.

Here we are, a goodly bunch of my senior class, waiting to get on the train to take us to D.C. and then to New York. Look at how we are dressed--girls in suits, gloves, and hats, the buys in suits and ties! It's hard to believe high school students once dressed like this for major outings.

I think I'm in the back row. The prettier, more popular girls were always in front, and my friend, the elegant Cheryl Phillips, now deceased, is the one in the center of that particular front row. I barely remember D.C., but I do remember New York and how amazed I was that the place never went to bed at night. At 2 in the morning it was still making so much noise I couldn't sleep in my hotel room. West Side Story was on Broadway that spring, and billboards advertising it were everywhere, "Maria," singing from every record store. We went to see The Sound of Music and the Rockettes, and we ate some very bad food, which we expected, since this was NYC, after all. Once you crossed the Mason-Dixon line into the Nawth, you knew nobody had figured out how to cook. I recall one of us asking for iced tea and the waitress saying they didn't serve that; we looked at her as if she were some benighted creature.

I remember being terrified of the subway, the stories I'd heard about falling in front of one, being caught in the doors and dragged to a horrible death. The kind of people I'd be pushed up against in the cars. I wore my money pinned into my bra. I was sure I would never survive the subways.

Mostly, though, I remember getting sick. Horribly ill with a bad cold, sore throat, and cough that grew worse and worse. I remember sitting in the audience at The Sound of Music terrified that I would have another coughing spasm. By the time our train returned to Albany, GA, I was having chills and fever, and next day I was hospitalized with pneumonia. I don't think the chaperones even noticed my travail, except when I coughed. They had enough to worry about!

I stayed in the hospital for over a week, then I developed pleurisy. It was quite a siege. I listened to the radio a lot--Soldier Boy was popular then, and so was Runaway. The Beatles and the Mamas and the Papas hadn't arrived yet. Elvis had, but by then he was old news.

I don't think I'd want to take a large group of students to the Big Apple and try to ride herd on them. Well, we did take a largish group of WCU students to London years later, and yes, we had one picked up by the police for smoking pot and another who didn't come back the night before we left, causing us to fear she'd been ....well, you know. She turned up next morning before we left for the airport as if nothing had happened.

Still, I'm glad I was able to have a real Senior Trip. My mother had gone on hers, and her stories had stayed with me. New York and D.C. were soon perceived as being too dangerous, as the Civil Rights struggle became front and center of our news. Southerners especially felt they were at risk in those cities; no sane parent would let a child go there, as my father commented.

I look at us in this small photo, dressed up and ready to go, ready to leave home and see the wide world. Despite knowing what has happened to some of us, knowing the way the world disappoints, the bright city lights seeming not so bright after all, I still feel a nudge of excitement.

I want those train doors to open again for me, and this time I want to be wearing not a hat or gloves, but sleek black boots, a poet's cape, a skirt that swishes as I stride throught the station, a wind that blows my hair as I climb into the car, holding my ticket, my money still pinned tight into my cleavage and a book of poetry I've been waiting for ages to read in my hands.
Posted by Kathryn Stripling Byer at 11:56 AM

How fun. We went to Pensacola to the beach on our Senior trip, all the way by bus from southern Arkansas.

It was fun but not as much as our yearly trips with the glee club all the way thorough high school to Hot Springs to compete in the state musical finals. Hot Springs was a "hot spot." They had gambling then. And of course the horse races, which they still have. Of course we weren't allowed to go to either as teenagers, but we always felt so grown up when we said we'd been to Hot Springs. Hey Bo Diddley was big then and we sang that song in the bus for hours. Ah, those were the years.
Sam

Hey Bo Diddley-----oh boy, yeah, those were the years. I think I'd have rather gone to the beach, but that trip to NYC was mind-blowing, not to mention what came after. I don't think I've ever been so sick.

Great post, Kay. I love the way you recalled this memory. I didn't get to go on a senior trip. Don't think they had one at my high school.I would have been just like you about the subway, the food, etc. We were taught those things and to this day I don't like to ride Marta in Atlanta and I'd be skeptical of subways in any city.
Your illness after the trip must have been horrendous. Thanks for sharing. Old photos are my favorite method of stirring the memory pot.

Love this post, Kay! Our senior trip in 1960 was to DC and NY. We saw MY FAIR LADY (from a balcony so high up that the people on stage were like tiny dolls. I still remember the shock of seeing an interracial couple in a restaurant -- and the waitress who, when given a breakfast request said, "What's grits?"

Thanks for the memories, Kay. I have a similar picture of my class waiting to board a plane in Chicago in 1964 for our trip to D.C. and N.Y. Like you, we all wore suits, hats, heels, and white gloves. Greenwich Village was the N.Y. hot spot that year, and a bunch of us crammed into a taxi to get there. I thought I was going to die. Our driver was a madman who cut off every car in his way, honked his horn and swore at nearby drivers, and generally scared us silly speeding through red lights and around corners while totally disregarding any pedestrian in his path. Our bus tour of Washington was much more sedate! :)

Hi Glenda, Vicki, and Mary, your posts really resonated. Subways still scare, and the one in Budapest last fall---lordy, it made me remember my first trip to NYC. And Vicki, I had the same reaction to interracial couples. We were shocked. Grits, hah! Now everybody knows what that is. We encountered one of the rudest waitresses ever in NYC. And also, another time, one of the most likable.
Mary, thank goodness I didn't go through a taxi ride like yours. I bet that driver really wanted to scare you. Yes, DC was more sedate, but my memories of it are not as vivid as the ones from NYC.