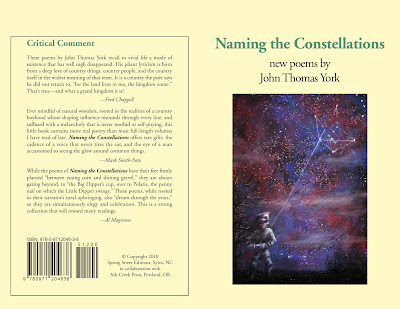 John York's splendid new book, Naming the Constellations: New Poems, has just been published by Spring Street Editions, in collaboration with Ash Creek Press in Portland, Oregon. York's daughter Rachel painted the cover image for the chapbook, and Fred Chappell, Mark Smith-Soto, and Al Maginnes provided testimonials.
A native North Carolinian, John has served his home state well as both public school teacher and poet. He has received the Teacher of the Year award from the NC English Teachers Association as well as the Poet Laureate Award from the NC Poetry Society. He has published his work in two previous chapbooks, as well as in numerous journals. I've featured him several times in blog posts both on Here, Where I Am and My Laureate's Lasso.

These poems by John Thomas York recall to vivid life a mode of existence that has well nigh disappeared. His pliant lyricism is born from a deep love of country things, country people, and the country itself in the widest meaning of that term. It is a country the poet says he did not return to, "for the land lives in me, the kingdom come." That's true--and what a grand kingdom it is!

York was born in Winston-Salem in 1953 and grew up on a dairy farm in Yadkin County. He was educated at Appalachian State, Wake Forest, Duke, and the University of North Carolina at Greensboro, where he earned an MFA in Creative Writing. He has also been a Mellon Fellow at the University of North Carolina at Chapel Hill, as well as a recipient of fellowships from the Council for Basic Education and the National Endowment for the Humanities. For over thirty years he has taught English in the public schools. In 2003 he was named Teacher of the Year by NCETA. John York and his wife, Jane McKinney York, teach at Penn-Griffin School for the Arts, in High Point, a magnet school in the Guilford County system.

His work has appeared in many regional journals, including Greensboro Review: He won that magazine's Literary Award for Poetry in 1985. He has previously published two chapbooks, Picking Out (Nebo Poetry Press, 1982) and Johnny's Cosmology (The Hummingbird Press of Winston-Salem, 1994). 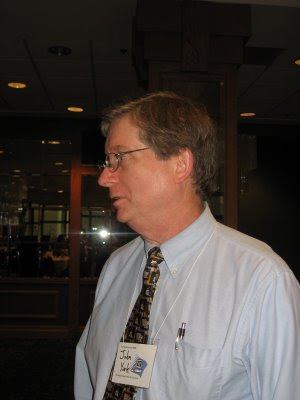 (John York, NC Teacher of the Year, at the NC English Teachers Banquet in Winston-Salem)

Or you may order directly from the author:

We at Spring Street Editions do not use amazon.com, preferring to work instead with Indie bookstores at indiebound.com.
Price is $12, plus $2.00 postage.

One morning, I walked down

the ditch between young corn and shining gravel,

lovely to my uncalloused feet.

I shuffled toward the giant trees hanging

walked right into a shower of music,

as strange as the melodies picked up by radio

I couldn’t see any aliens,

but I knew their hymn—how wide the sky

was my rough translation,

or maybe the visitors

were merely chirping, laughing at a dirty

how slowly and quietly he moves.

I could tell they were the true rulers of the universe,

the grasshopper, the morning glory--

the singers’ babel a blessing,

telling everything to grow. 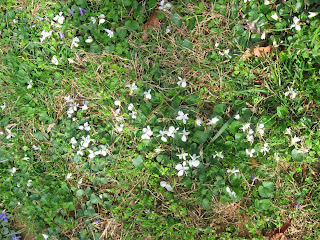 My father quit the farm

one piece at a time:

no word of her destination,

then the cows, thirty-five Holsteins,

sold to a man who didn’t know their names,

the tractors, the tall John Deere,

the wagon rolling on slick tires,

a yellow cultivator splotched by rust,

iron-spoked wheels higher than my head,

a disk harrow, a bull-tongued plow,

the tobacco sleds waiting for summer,

the mowing machine whose teeth

chattered through the alfalfa on the hottest days

and the raking machine that churned

its twin trays, belts, and hoses,

a tractor, the irrigation pipes.

I would come home from school

and the landscape would be changed

in a subtle way

I refused to understand,

the pastures, too quiet, the growing

vacancy in the machinery shed.

my father out for a long haul,

my sister helping my mother pack,

I wandered about the farm,

down to the bridge, along the creek,

up to the highest hill, where I could look

over the farm and see Mt. Nebo in the distance.

I was looking for a missing piece,

the edges invisible but sharp:

the wind passed through me, as if

I were a wood stove, left there by the road,

the door left open, the wind

lowing over a rusty pipe.

of school starting, the rows marched up the hill and the leaders

hid their tassel tops in a cloud’s belly. I would’ve laughed

at gravity and followed Jack, but then Claude Jester came

running from the tobacco barn, just as the wind blew

a wrinkled piece of tin over his head: the thunder

boomed and that was the end of summer: Mom

said, “Soon we’ll need to buy you some green

jeans and new shirts, Johnny,” and I worried

that my friends would have forgotten my

name, it had been so long since May.

That rainy afternoon, Mama let me

play with a clock she used for

teaching time. I spun the

the red hours, I dreamed

through the years, until

I had a wife and three

girls were little, we

liked to go to the

into a slot that

circling in a big

Posted by Kathryn Stripling Byer at 11:40 AM

All wonderful but "Puzzle" broke my heart.

The litany of farm machinery. . .such a beautiful unfolding of words.

...and John is such a gentleman poet too. I can't wait for my copy of his book to arrive. Thanks for sharing.

I have a small 'Writing as Blogging' class going here in the Arctic. So far, of all the blogs I have shared with them, they have liked the poet blogs best. I will be sending them this link this week. Can't wait to hear their reactions. And it IS nice to have poetry moments worked into the week. Thanks for sharing.