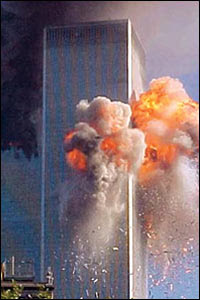 Here are a few poems from my chapbook Wake, published by Spring Street Editions in 2002. It's available online, signed by the author, from City Lights books at www.citylightsnc.com.

I knew no one who perished.

For that I am grateful.

My nephew had moved from the city a year ago.

My friends lived or worked blocks away from Ground Zero.

One watched from her office the small bodies leaping.

Another stepped onto the street as the second plane circled.

Out of the subway another climbed into a sky of glass falling.

The scrolls of their e-mails continued for days.

Again and again I try not to imagine myself onto either plane,

the continent stretching before me,

out there on the edge of it, sun just beginning to rise.

Scent of fresh coffee, the rattle of carts...

Here nothing flies into my windows but birds.

They have lain in my daughter’s palms,

pressed to her chest for the warmth of her beating heart,

until their broken-necked bodies grew cold,

and she looked up at me, as if asking, What now?

And I answered, Now go wash your hands.

Ruth and Juliana McCourt were passengers on Flight 175.

and the memory of Ruth and Juliana McCourt

Your image of angels attending the ruins

fails to move me.

I try to imagine their presence,

but over and over the plane burrows

into the tower of steel and glass,

bodies of flesh and blood,

the morning indelibly sunny and crisp.

So much God talk these days

I am almost afraid to ask, Where

was He? Too busy pouring the wine

for a new round of martyrs? Inspecting the sheen

on his solid gold cobblestones? Meanwhile

the plane gleamed in His holy firmament,

held, like the sparrows of old, in the palm of His hand,

in its cockpit, the young men who prayed

to be gathered up into the silk tents of Paradise.

What more to say?

That tonight I am wary of angels

unfurling their wings like the flags I see brandished

from buildings and vehicles,

That I ask of a poem only this:

Give me dust unto dust.

Let the pulse of it be nothing less than

their requiem, even as they enter into

the sky shining off those sheer towers.

in her mother’s arms,

she once slept beneath

Posted by Kathryn Stripling Byer at 11:48 AM

That's what poets do -- say the unsayable. Thank you, K. These are perfect.

And thank you, Vicki, for visiting my blog even though I've been such a slouch lately in posting.

I am pleased to read these again, Kay.

Kay. . ."now go wash your hands" turns something over in me. I'm startled anew by both poems. Thank you.

Section 4 in Critique leaves me breathless. And that photograph....

So touched..again..I remember the dust ceaselessly falling for three weeks..brushing it aside constantly..knowing what it was made up of..

that last poem is just amazing. the poet's ability to be so fearless and to just SAY it just about brought me to tears! And that definitely doesn't happen often for me. Thanks for sharing these.

Startling and poignant. Thank you, Kay.