PAT RIVIERE-SEEL: COFFEE WITH THE POET 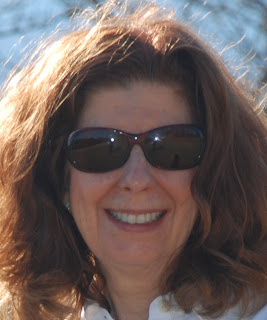 February's Coffee with the Poet features Pat Riviere-Seel, a friend who graced my poetry class in the Great Smokies Writing Workshop several years ago.  Pat has become a vibrant presence in our North Carolina Literary community, offer her talents and her time to her readers and the literary organizations that help draw us all together.  Please join us at City Lights Bookstore on Feb. 16 at 10:30 to meet Pat and listen to her read and talk about her work.  Our gatherings are always informal and, yes, fun.  Afterward, I highly recommend lunch downstairs at City Lights Cafe!

Here is a poem of hers that I love.   You can find more on her website by clicking on the link above.

The bears returned last night.
The mother and her three cubs
slept in the mound of leaves.
They left deep indentations
where summer-sated bellies
and massive paws lay curled
beneath the maple’s outstretched limbs
and the quarter moon’s pale light.
All day, while I raked leaves into piles,
the bears were watching. They moved
silent and unseen among evergreens,
gray trunks, and branches as they had
all summer. Preparing for winter sleep,
they stuffed themselves on acorns and grubs.
One late summer day they came  into
the orchard. The cubs shimmied
up the young apple trees, bent
one bough to the ground and broke
another in their play. The mother
took her time selecting fallen apples,
and those she could reach balanced
on her hind legs. She carried these
one by one to her cubs, gently
urged them to taste and chew.
She knows how long winter lasts.
Pat Riviere-Seel

Pat Riviere-Seel has published two poetry collections, The Serial Killer’s Daughter (Main Street Rag, 2009), winner of the Roanoke-Chowan Award for Poetry and No Turning Back Now (Finishing Line Press, 2004), nominated for a Pushcart Prize. She teaches poetry at UNCA in the Great Smokies Writing Program.

Pat is a 2003 graduate of the MFA Program for Writers at Queens University of Charlotte. Her poems have been published in numerous literary journals and anthologies including Asheville Poetry Review, Passager, Tar River Poetry, and Kakalak, an Anthology of Carolina Poets, among others. Recent poems  appear in Boomtown, the Queens University MFA Program 10th Anniversary Anthology, Cloudbank, and Poetry of Love, an anthology published by Jacar Press.

Her poetry has been nominated for three Pushcart Prizes and was a finalist in the Press 53 Open Awards and a semi-finalist in the first James Applewhite Poetry Prize in 2011. The Serial Killer’s Daughter premiered as a staged reading in March 2011 with a 4-member cast.

Pat is a former award winning journalist, lobbyist, publicist, and editor. She worked as a political reporter for daily newspapers in Fayetteville, NC, and Annapolis, Maryland until 1987 when she established her own public and government relations firm. She represented nonprofit organizations in the Maryland General Assembly, designed public relations campaigns for private businesses and political candidates.

In 1992 she returned to her native North Carolina to take a position as Editor of Voices, the bimonthly journal of Rural Southern Voice for Peace. She married Ed Seel in 1997 and moved with him to Germany for two years. During that time, Pat attended the Spoleto Writers Workshop in Spoleto, Italy. 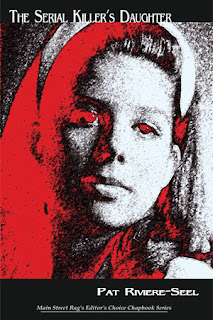 I. About the Daughter
The serial killer's daughter hangs damp sheets on the line.
She likes the yeasty way the wind fills the cloth and how the sun sweetens the
threads.
When she holds the clothespins between her teeth, she tastes bread and salted butter.
She no longer worries about trying to hold on to the brass pole of the carousel.
The serial killer's daughter can hold anything - or anyone - she pleases.
Preferring familiar company, she surrounds herself with dahlias and lavender.
She always rides the wooden tiger because there is no bear.
Why are the animals always one step ahead of the humans?
The serial killer's daughter knows how frightening a creature walking upright can be, so
she always walks as if she were about to waltz.
Her hands write a language only she can read.
She's not a figment of anyone's imagination.
She is sunlight striping murky swamp water.


The serial killer's daughter wears tight curls made of cypress roots and washes them in
buttermilk from the moon.
When mud oozes between her toes she no longer worries about wiping her feet before
stepping through the door.
She likes to touch people she loves on the nape of the neck and feel the rocky landscapes
of their spines.
Her heart measures her intentions and stretches them in a chain around her wrist so she
will not forget.
The serial killer's daughter waits for no one.
It never matters if she is on time. Whose time?
Time is irrelevant, like memories she saves and forgets.
Because her life needs seasoning she grows spearmint, basil, and lemon balm.
The serial killer's daughter is always leaving Robeson County.
For her, the stone covered with moss and mica that she carries in
her pocket contains a galaxy.

Dense with beauty. These poems make me think of slow food.