Last night the magic of flamenco came to Cullowhee.   The seduction.  The eroticism.  The exquisite yet passionate interplay of music, voice, and movement.   La Pasión Flamenca brought its touring performers to WCU's Fine and Performing Arts Center, and let me tell you, it was hard to sit still in a small auditorium seat during the performance!  My body wanted to move, my fingers wanted to coil around the rhythms, my palms wanted to drum against my blue-jeaned thighs.  I wanted to be part of it all!

I discovered flamenco music since I was in high school.  As a freshman at Wesleyan College, I signed up for Spanish because I'd fallen in love with Spanish music, and although I never learned to speak the language with any facility at all, I still love the sound of it, particuarly the voices of its poets.  Garcia Lorca.  Octavio Paz.  Jimenez. Cernuda.  I've always wanted to be able to dance flamenco, and in the following poem, I imagine doing so.  After last night's show, I am imagining this even more fiercely.  I think I'll try to order some flamenco dancer shoes.   I have plenty of shawls.   Now, let me dig out my old flamenco guitar records!


The hands.  The secret lies in the hands,
the dancer from Andalucia explains
on the afternoon radio program,
the secret of everything opening
over and over again.
Even these windows,
sealed shut over too many winters,
through which I can smell the wisteria.

Soleares,
Seguiriyas--
the guitar strings throb
through the static and  I feel
my spine arching,
arms begin twining
around me, my fingers seducing

the air.  Stroking emptiness.  Oh,
to be wrapped like a gypsy in endless black fringe
I would slowly unwind from my hips and let
fall to the floor.  Kick it out of my way

and get on with the real work of dancing
this song to its end, drunk as always
I’ve wanted to be  with the scent of these blossoming
vines that my mother said ought to be  ripped
from a tree before they have enough time to kill it. 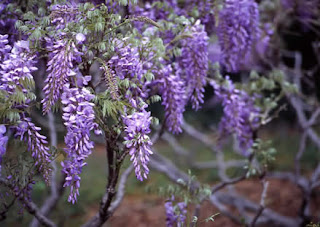 Posted by Kathryn Stripling Byer at 11:41 AM

Love the poem -- and I love flamenco. I saw Jose Greco perform in 1960 or 61 -- he was past his prime but still spectacular. And I had the records -- Carlos Montoya, Manitas de Plata.

I saw a film years ago about a group of flamenco dancers practicing for a version of Carmen. I think it was called Carmen and out in 1983. I mainly remember an old woman teaching a young one how to carry herself in the dance. 'Como una reina,' she said.