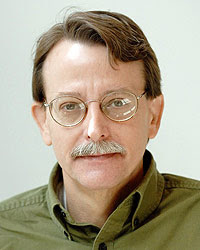 I came to know James Brasfield and his wife, fiction writer Charlotte Holmes, many years ago when she taught at Western Carolina University. Jim's collection of modern poetry must have been the most extensive of anyone's and surely the most capacious I had ever seen. I knew he was a poet himself, but it took a few years before I knew just how good he was. His reading at the WCU Literary Festival left me

in a state of profound silence. I knew I had to read more of his work. He obliged by sending me his first manuscript of poetry, later titled Ledger of Crossroads. LSU Press published the collection last year. I'm featuring several of the poems, in hopes you will want to order his book from LSU or from an indie bookstore. I believe you will share my state of attentive silence after reading these poems.

Here's a bit more about Jim.

In James Brasfield’s Ledger of Crossroads, layered by light and shadow, the crossroads emerge from distinct yet inseparable geographies. Grounded in the sensual world, the poems fuse American and Eastern European landscapes: “the char of silence and beauty, / brick foundations of what was here, dirt roads / cut through pines, rivers and the dust of the dead.” Here are experiences from the American South, of those who believed Jim Crow “the way things . . . had to be,” and from the fallen imperiums of those “who have always / returned to fewer trees and a wall,” whose intimate perceptions provide moments of reprieves: “beyond the faint scent / of almond in the air and heavy clouds / funneling from the earth into snowfall, / the current calmed within that distant / bend of the Vistula.” Here we become the identities of others, their time and place, from the strata of their histories. They enter our lives.

James Brasfield has twice been a Senior Fulbright Fellow to Ukraine and has received fellowships in poetry from the National Endowment for the Arts and the Pennsylvania Council on the Arts. He is a recipient of a Pushcart Prize, the American Association for Ukrainian Studies Prize in Translation, and the PEN Award for Poetry in Translation. He is the cotranslator of The Selected Poems of Oleh Lysheha.

Every day came, the char of silence and beauty,

brick foundations of what was here, dirt roads

cut through pines, rivers and the dust of the dead,

bone silt and a song, bird cries, the freight train

through the county, crops and cows, chickens wandering

a patch of yard, wind through sun-silvered leaves,

Every day came, a hound in the yard.

Call it circumstances, the way we thought things

had to be, rough and polished stones on a creek bank.

We had no choice but to believe, sincere and alone

and the black faces, their eyes lowered

in our homes on Broad Street. We did not sympathize.

It was almost normal. Call it circumstance,

the alarm and nature of sidelong glances,

the way we thought things had to be,

God's will, our history and we wanted it quiet.

It was always dark. You get used to anything, we said

with eyes lowered. It was almost perfect here,

mist and wildflowers, the charred cross

in a field. It was almost normal, a quiet stream

and a gravel road. Every day came.

It was dark and no one could see.

Through the colonnades of oak

arched over the cold road, I drive through rain

filtered through the moss cathedral—

the outbound sun, distant at the crossing,

I remember my last spring here,

the air warm with the coming of another season.

Nothing was in the field, then a tent appeared

I witnessed the Pentecostal fire.

With a tambourine, Lurleen, our go-between,

beat out a rhythm on her thigh.

while the organist moved from chord

to chord, holding each a long time.

The small clamor of hands clapping

was meant to stir the air in hell.

But who heard the wind rising

through sycamores, shifting the paunches

of the flaps, or past the hymns, the field,

miles away the serene code

of successive beats upon the tracks. . . .

Yet what I remember most about Waynesboro,

governed still by its white grandees,

on a hillside, watching from scrub grass,

waiting as the last passenger

run between Savannah and Atlanta

approached town, not to stop here,

never having stopped here, its whistle

before it was gone. Forever for me

she stands there, facing that train

as now on this road the dark, inbound

white sun over a tin-roofed shack.

rain from the glass. She is here—

borne up motionless above the crossties,

a place in mind, through the moonless night.

Nor it nor no remembrance what it was.

lost to avalanche. People who return

say the streets are clean in Deutschland—

on the walks, a mere light dusting

from the newly fallen. Here

in the crosswinds, streets

and walks are buried in ice.

Wherever they are, Little Vienna,

Last night, who spread the path

of ashes on the walk? Some new tenant

not knowing what else to do

with a cigar box of ashes, handed down,

found far back in the wardrobe?—

the new tenant happy after a night

of polka and a waltz, losing his feet

with his new wife, arm

in arm, and saying later, "Well,

across the blackest night—

ice giving way from the balconies . . .

The winter potatoes I peeled were stones

of white mold brighten the heel of the brown loaf.

How those wisps of clouds closed in on the stars—

about to fall from its string.

Already the path's covered as under a field

a foothold here where winter, as long

as snow falls, lasts a lifetime,

and not to remember the star lodged

in the branches, a crow now to light a limb,

and as it happens suddenly, those flocks

take flight. The gaps between them

are like those places where we hope to see

any star beneath moving clouds.

Does the old man hear those wings?—

in each hand a long poplar branch,

the furrowed millimeters of rippled ice—

or does the man leaning against the building

at the corner of Tolstoy Street?

He sings lightly to himself, staring

beyond the tin roofs, heavy with snow,

over the heraldic crests on the faded plaster

of your cracked facades, Little Vienna—

or bundled in black, returning to the village,

does the old woman under a scarf, sliding her feet

She leans into the knot end of a rope—

two bags of potatoes on a little wooden sled.

Posted by Kathryn Stripling Byer at 6:09 AM

Oh my! He brings a time and place I knew so well to luminous life. These are wonderful.

Indeed, indeed. Kay, thanks for calling attention to this deeply moving poetry.

So glad to see LSU is gong to continue putting out quality books like this!

YoBit enables you to claim FREE CRYPTO-COINS from over 100 unique crypto-currencies, you complete a captcha once and claim as many as coins you want from the available offers.

After you make about 20-30 claims, you complete the captcha and proceed to claiming.

You can press claim as many times as 30 times per one captcha.

The coins will stored in your account, and you can convert them to Bitcoins or any other currency you want.

If you are looking to BUY bitcoins online, Paxful is the ultimate source for bitcoins as it allows buying bitcoins by 100's of different payment methods, such as MoneyGram, Western Union, PayPal, Visa, MasterCard, American Express and even converting your gift cards for bitcoins.

Are you tired of looking for bitcoin faucets?
Triple your claiming speed with this advanced BTC FAUCET ROTATOR.