POET OF THE DAY: AL MAGINNES

Al Maginnes writes some of the most tender, heart-wrenching poems around. He has a new chapbook, Between States, coming out soon, so see below to find out about the pre-publication offer from Main Street Rag. His chapbook was recommended by Richard Krawiec, who will be Poet of the Day on tomorrow's post. 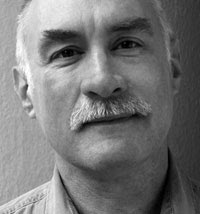 This Limited Edition chapbook is part of Main Street Rag's Author's Choice Chapbook Series. Print run is based entirely on advance sales. Advance Sale Discount price of $3.50 (+ shipping) will be available until May 4. Release/ship date will be May 11.

"Dream what has always been dreamed,/ and nothing changes," begins one of the poems in Between States. The people in these poems are looking for new dreams and new ways of dreaming. Many of the individuals begin at a place of uncertainty, but refuse to stay there. Over and over, these poems insist that we are not defined by our physical circumstances but by our reaction to those circumstances, what we do, what we say. These poems show how "the need to be heard does not change." Al Maginnes does not offer easy answers; he understands that we are "puzzled by/ a past we were too quickly part of." But he does offer the possibility for hope. He recognizes the "invisible music" that binds us, the possibility of "song that flies over/ empty plains of prayer and absence" to let us sing our purest human music.

When the plane's cabin filled
with the sound of crying, I blamed
the children a few rows forward.
Below us, the landscape
of one anonymous state unfolded
into another. Would it surprise you
to learn the one crying was a woman?
The volume of her grief would not
yield to the whispered comforting
of the attendants. Beside me,
a man, suit rumpled from
too many flights, grunted in sleep
he held as grimly as a child might
hold the ragged blanket that has been
her most reliable companion.
My daughter cried for the three-
and-a-half hours of her first flight,
her ear, already infected, burning
with altitude, the song I sang
to soothe her as unwelcome
as the plane's pressurized air.
Maybe the woman wept for illness,
her own or someone else's,
or some betrayal of love because
we are mostly easily broken
by what is near, our body
or the body we bring close.
The body of the daughter
I bathe and pray over
will become foreign to me,
a journey as inevitable
as the failure of my body
or the words I whispered
to quiet her or the tears
of a stranger as we were all
borne from one state to another.

Posted by Kathryn Stripling Byer at 5:01 AM

Another good one, Kay! You are constantly broadening my horizons.

Lovely piece. I always wonder at a particular group, travelers banded together in a plane.

I loved Al's "Ghost Alphabet" but I definitely need to pick up this chapbook :)