POET OF THE DAY: MIKE SMITH 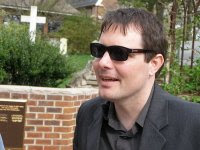 Mike Smith lives in Raleigh, North Carolina with his young daughter and son. A graduate of UNC-Greensboro, Hollins College, and the University of Notre Dame, he has published poetry in magazines such as Free Verse, Hotel Amerika, The Iowa Review, The Notre Dame Review, and Salt. His first full-length collection, How to Make a Mummy, was published in 2008.

Anecdote of Defeat and Defeat

Those afternoon visits to the West Virginia

of flies, flowers, and the feeble grasp

of weeds under a cow-belly sky

the wisest once deemed worthy of worship.

(Was I eleven?) my mother, trespassing

her way over a patchwork pattern

of forest and yellow pastures, the ever-present

unmoving, on the distant mountain

that became, in time, something laughably

in a field, a chair and ottoman, no,

the remnants of a rusty still,

some altar. (This should be the painting

of a photograph on the game-room wall)

But the mother and young calf swung

their heads to stare my way. I paused to mark

the mother’s warrior’s helmet of a nose,

the bones easy under loose hides,

over sores and soft parts—Trojans destined

to extend behind the ramparts, yet shiny

with surf. The wide-eyed calf stayed

of hate rose in my throat. I guessed then

there would never be real fight in me,

but, also, that there would never be a need.

Slide the blue river on a tube, cheat

with a shout the heads of stones, tunnel

the narrows, breathe in every pore

or branch off with a splash

to walk my fingers above the surface

of the water. God, it is good

to get drunk in the woods.

I used to jam together every word

that rose in my thought so long

as it retained a ripple of sense.

Catch and release, since what we have

we are sure to lose anyway.

Let me loose my pants

on this very stump, for the drunk mind

seems to get nearer these passages, these lit reds

and greens, so I let myself drop

to my fern bed. I sleep, calm, beneath trees

some early god made whose eye

now only envies as it kills.

Which is why I refuse to return,

instead, my bottle up

to this salamander supreme

I see swim so largely the stream,

is to enter further the forest, mix up

on the way another batch

of the stream’s bubbly, and imbibe

for the devil dog that exudes

this new truth, my patron saint

of having nothing to lose. I drink

to having nothing to lose. I rise. I drink. 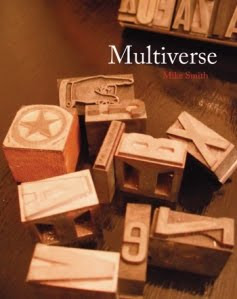 Posted by Kathryn Stripling Byer at 8:03 AM

always, always, so good to come here -
you and i are due for a lunch date xx

Hi Nina, maybe next week, if all goes well with some family stuff!!!

The anagram poems are quite a feat!

Have you ever consider maximizing your free BTC collections by using a BTC FAUCET ROTATOR?

If you are looking to BUY bitcoins online, Paxful is the best source for bitcoins as it allows buying bitcoins by 100's of payment methods, such as MoneyGram, Western Union, PayPal, Visa, MasterCard, American Express and they even allow converting your gift cards for bitcoins.