POET OF THE DAY: PAULANN PETERSEN

I met Paulann Petersen while visiting my friend Penelope Scambly Schott last summer in Portland, Oregon. Paulann in many ways is the center of the poetry community in Portland. She maintains a small poetry critique group, in which I had the pleasure of participating, she hosts gatherings to celebrate new books by regional writers, and she manages in the midst of all this to sustain a vital creative life of her own. Please visit her website (link below) to find out more about this remarkable woman. 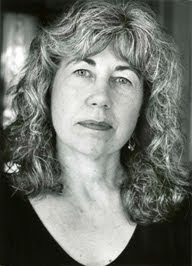 Paulann Petersen is a former Stegner Fellow at Stanford University whose poems have appeared in many publications including Poetry, The New Republic, Prairie Schooner, and Wilderness Magazine. She has four chapbooks--Under the Sign of a Neon Wolf, The Animal Bride, Fabrication, and The Hermaphrodite Flower. Her first full-length collection of poems, The Wild Awake, was published by Confluence Press in 2002. A second,Blood-Silk, poems about Turkey, was published by Quiet Lion Press of Portland in 2004. A Bride of Narrow Escape was published by Cloudbank Books as part of its Northwest Poetry Series in 2006. Her latest book is Kindle, published by Mountains and Rivers Press in 2008.

I rub my shoulder

getting the feel of this creature

My fingers curve to knead blood

toward a muscle’s hurt, lotion

into an elbow roughened by neglect.

with the wear of pavement’s grit.

Bit by bit, night by day,

ready for light. Let me be

a mirror in which something else

the burnished stone beneath

a lifetime of water, flowing.

From Kindle, Mountains and Rivers Press, 2008

Posted by Kathryn Stripling Byer at 5:11 AM

Let me be ... that second stanza is a wonderful prayer.