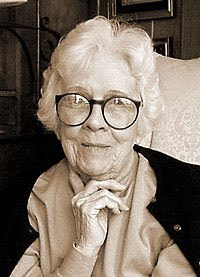 I first heard of Eleanor Ross Taylor when I was a student in UNC-Greensboro's MFA writing program. She was the wife of Peter Taylor, the Pulitzer Prize winning novelist and short-story writer and long-time teacher at the university. More intriguing, though, was the news that she was also a poet, considered one of the best by none other than Randall Jarrell. I met Ms. Taylor at several parties, where she was gracious but reserved. Then I read her poetry and found a poet whose voice was and still is completely her own.
Now comes the news that Eleanor Ross Taylor has been awarded the Ruth Lilly Poetry prize from The Poetry Foundation, perhaps the most prestigious award given to an American Poet. No poet deserves it more than Ms. Taylor. Poet of the Day? I should name her Poet of the Year, at least.
Here are a couple of her more recent poems. Follwing them is the press release for the Lilly Award.

In the margins: here incoherent.

the less it says outright,

wants in fact not to say.

Contrary to belief, the word diary

the pages and the trail breaks off,

the only way out of this place.

Yet the helpless subjugation

to the daily task,

love for the white-hot page

that drains the wound, seals it.

I know the heroines of the craft-

the small-town wife, the clear some,

in her doubtful second marriage;

From pages hidden in the covered wagon,

“I said nothing, but I thought the more.”

(But in a letter home:

of the night she fled upriver.

How to confide the footsteps of a shroud

under your window in the night?

The denials, the costumed felons

lurk in your wakings, nervously

pressing mustaches over their teeth.

Why are those scuds of gulls

hanging over the swamp today?

CHICAGO — The Poetry Foundation is pleased to announce that poet Eleanor Ross Taylor has won the 2010 Ruth Lilly Poetry Prize.

Presented annually to a living U.S. poet whose lifetime accomplishments warrant extraordinary recognition, the Ruth Lilly Poetry Prize is one of the most prestigious awards given to American poets. At $100,000, it is also one of the nation’s largest literary prizes. Established in 1986, the prize is sponsored and administered by the Poetry Foundation, publisher of Poetry magazine. Over the last 25 years, the Lilly Prize has awarded more than $1,800,000. The prize will be presented at the Pegasus Awards ceremony at the Arts Club of Chicago on Tuesday, May 18.

In making the announcement, Christian Wiman, editor of Poetry magazine, cited the strong reserve in Taylor’s poems and praised their “sober and clear-eyed serenity” and authority.

“We live in a time when poetic styles seem to become more antic and frantic by the day, and Taylor’s voice has been muted from the start. Muted, not quiet,” said Wiman. “You can’t read these poems without feeling the pent-up energy in them, the focused, even frustrated compression, and then the occasional clear lyric fury. And yet you can’t read them without feeling, as well, a bracing sense of spiritual largesse and some great inner liberty.”

A portfolio of 10 of Taylor’s poems will be featured in the May issue of Poetry. In introducing the selection, Wiman writes:

The winner of this year’s Ruth Lilly Prize is Eleanor Ross Taylor. I suspect the name will be unfamiliar to a number of our readers, the work to even more. Until the excellent selected poems, Captive Voices, was published by LSU Press last year, virtually all of Taylor’s work was out of print. Her slow production (six books in 50 years), dislike of poetry readings (“It seems to me that it’s all for the person and not the poetry”), and unfashionable fidelity to narrative and clarity haven’t helped matters. And yet, as is so often the case, what’s been bad for the career has been good for the poems. With their intricately odd designs and careful, off-kilter music, their vital characters and volatile silences, the poems have a hard-won, homemade fatedness to them. You can feel their future.

The awards ceremony will also celebrate the life of the Poetry Foundation’s late benefactor, Ruth Lilly, who died in December at age 94, with readings by Catherine Bowman, Ruth Lilly Professor of Poetry at Indiana University, and 2001 Ruth Lilly Poetry Fellow Ilya Kaminsky. In addition, Eleanor Ross Taylor’s editors Jean Valentine and Dave Smith—also poets and friends of hers—will be featured as part of the event.

“Poetry has had no greater friend than Ruth Lilly,” said Poetry Foundation president John Barr. “On this occasion, the 25th anniversary of the awarding of the prize bearing her name, we honor a life of extraordinary generosity and dedication to the art form.”

In 1985, Lilly endowed the Ruth Lilly Professorship in Poetry at Indiana University. In 1989 she created Ruth Lilly Poetry Fellowships of $15,000 each, awarded annually by the Poetry Foundation to undergraduate or graduate students selected through a national competition. In 2008, the Foundation increased the number of Lilly Fellowships awarded each year from two to five.

In 2002 Lilly’s lifetime engagement with poetry culminated in a magnificent bequest that will enable the Poetry Foundation to promote, in perpetuity, a vigorous presence for poetry in our culture.

A mother of two grown children and a grandmother, Taylor now resides in Charlottesville, Virginia. She has received the Poetry Society of America’s Shelley Memorial Prize (1997–98), a fellowship from the American Academy of Arts and Letters (1998), the Library of Virginia’s Literary Award for Poetry (2000), and the Aiken Taylor Award for Modern Poetry (2001). She was elected to the Fellowship of Southern Writers in 2009.

Posted by Kathryn Stripling Byer at 5:29 AM

This is a beautiful spring morning and yours is the first blog I read and am happy to have done so. I did not know about Ms Taylor’s poetry. Her poems here have vivid and complex sentences which I need to reread carefully. My husband is an avid admirer of her late husband, Peter Taylor. He took a course under him as a grad student at Ohio State where Mr. Taylor was a guest professor. My husband says he got to know Mr Taylor well and that he was funny, with a pointed type of humor. I’ll find more of Ms Taylor’s work. Thanks for this enlightening post.

Wonderful poetry from a poet new to me. Thanks, Kay!