POET OF THE DAY: SUSAN KIRBY-SMITH 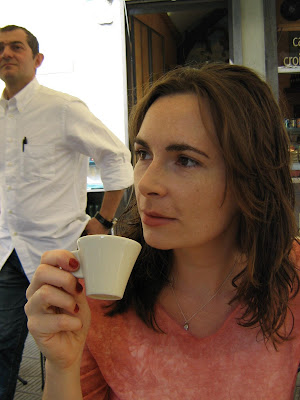 (Susan, with coffee, in Florence, Italy) I found a promising, what we older writers like to call "emerging," young poet last week. One who will without a doubt become one of the writers we North Carolinians can point to with pride. Turns out I knew her already as the daughter of my friend Tom Kirby-Smith, who taught for years at UNC-Greensboro and is himself a fine poet. I knew that he and his wife Noel Callow, also a poet and UNC-G MFA alumna, had a daughter the same age as ours named Susan, that she had attended Oberlin College, where our daughter spent her first year, but beyond that, I hadn't a clue as to what Susan had been doing over the past decade or so. Well, I found her, or rather she found me, through a comment she left on Rhett Iseman Trull's "Poet of the Week" post. I tracked her down through her online e-zine, Unmoveable Feast, and emailed her, asking to see some of her work. She responded with a poem I liked a lot, and when I asked if she'd let me use it here, she agreed. After you read Susan's poem, go to www.unmoveablefeast.com and look around. There's plenty to enjoy, so take your time. Susans says, "Right now I am living in Baton Rouge and completing an MFA at LSU. I met Rhett at a conference and then helped her with Cave Wall for a few issues. My husband and I are thinking of moving back to North Carolina in a year and I know I'll want to continue to get to know literary communities here. Although I am to try out teaching again this year I have been doing editorial work (The Southern Review) and often daydream about being able to have another editorial job at one of the many fine presses around NC. Here is a poem-like composition that's more or less about writing poetry."

A girl, a woman really, sits inside staring--

for hours in front of a blank, blank screen

and, eventually, these poems appear.

But she’s not exactly sure they’re poems

Aren’t poems supposed to have images?

Like the girl sitting, on the dirty gray couch,

her face tense as the screen fills with words,

but how mundane they are

and how ordinary the image is—

Can’t she put in something exciting?

The thing now crawls with its hundreds of legs,

shuffles over and sits down next to her,

pokes her with his long spiny tendrils,

She tries to groom him, he’s full of poison,

speak with him, but he only lies.

At long last, she closes the screen--

with a shriek and a puff, he’s vanished away.

The red caterpillar, of course, echoes WC Williams's red wheelbarrow, but what a transformation! Those hundreds of legs, the audacity of that image, poking her, lying to her---how could I resist this poem-like poem? That caterpillar is definitely "emerging"!

Posted by Kathryn Stripling Byer at 10:20 AM

Love that red caterpillar! That must be how the Muse prefers to manifest herself these days, having grown bored with lyre and flowing draperies.

What a wonderful "poem-like poem!" Mrs. Kirby-Smith is a fine young poet.

I am loving these. Thank you!!

I like the lines: “At long last, she closes the screen--
with a shriek and a puff, he’s vanished away.” It is easy with the computer – I wish other things in life would vanish as easily. I like the concept.