POET OF THE DAY: ISABEL ZUBER 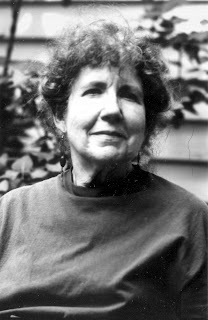 My good friend Isabel Zuber is both poet and novelist. We met 30 years ago at a writers conference led by A.R. Ammons in Critz, Va. A native of Boone, NC, she has lived her adult life in Winston-Salem. Her first novel Salt was published by Picador, and her chapbooks of poems have been published by the NC Writers Network (Annual chapbook award) and Persephone Press. More of her work may be found in the archives of ncarts.org, as well as in several anthologies, the most recent being Southern Appalachian Poets (http://www.mcfarlandpub.com/) and Clothes Lines. The following poems are from her forthcoming full-length collection Red Lily (Press 53)
Nightward


A last enormous freedom
is to run into the dark,
barely enough day left
to see vague hydrangeas
massed along the drive
and junipers up like spears
against the sky. Bound then

in the dusk with all that
can be there light says is not.
Rush the yard on grass-lashed,
bug-bit legs, turn round
and round till stars collide
with spires, breaking the
huge dinning noise
of all those tiny voices.

Such venture is less, or more,
than brave, for dew’s sweet
or bitter, and there’s always
the lighted doorway and
the sense that if one runs
far and hard enough
there are arms in the darkness also.
Whale Walk

These days they move with flippers, fins and flukes,
not feet, yet in time more than ancient
they walked. And they got around,
left pieces of themselves, a femur, pelvic nub,
bits of toes, to fossilize in Pakistan, Egypt,
Georgia and other places. Imagine
how those feet must have hurt.

Seated somewhere by a temperate shore,
tempted to dabble in the surf, they discovered
it felt good. So why not?
Earth takes several million turns
and there they are back in the water.
swimming and singing to each other
unbothered by bunions or blisters,

nothing to fear after millennia except
giant squid and small people.
Posted by Kathryn Stripling Byer at 5:00 AM

really love the opening of Nightward :)

The first reminds me of my childhood, playing outside after supper as the dark crept up on us. And the second-- what a delight!

Isabel,
Your poem Nightward makes me want to (once again) dash barefoot into the summer darkness, not worrying about slug slime, copperheads, or all the terrible/wonderful things we risked encountering as children!

Isabel, It makes me happy to see your pretty face. Congratulations on your forthcoming book . I will buy it.