Tony Abbot has devoted much of his life to North Carolina's literary community, as well as to his own writing. A poet and a novelist, he is a master teacher, one who energizes his students, no matter their age. His New and Selected Poems appeared last year from Lorimer Press. 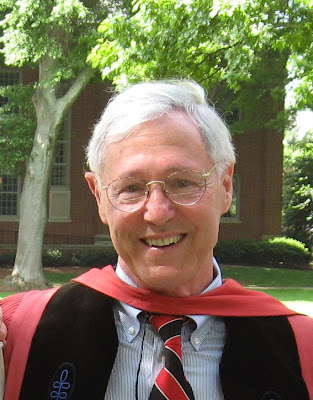 Anthony S. Abbott was born in San Francisco and educated at Fay School in Massachusetts and the Kent School in Connecticut. He received his A.B. from Princeton University and his Ph.D. from Harvard University. He is Professor Emeritus of English at Davidson College in Davidson, North Carolina, where he served as Department Chair from 1989 to 1996. His first novel, Leaving Maggie Hope was published in 2003 and received the Novello Literary Award and ForeWord Magazine’s Gold Award for literary fiction. It’s sequel, The Three Great Secret Things, was published in 2007. He is the author of five books of poetry, including the Pulitzer Prize nominated The Girl in the Yellow Raincoat. His most recent book New & Selected; Poems 1989 – 2009 was published in 2009 by Lorimer Press.

Blood red of late October in the South,

and from the cemetery to the college campus

on the hill, the leaves bathe my eyes.

I turn each corner into dazzling surprise.

In my mind’s eye, she walks toward me.

I show her my favorite tree. I pluck three

leaves and watch as she carries

them away. This is new found grace,

and in the space where sadness once lay

In the South, October lingers, the gold

sun glances off the trees. November will

I know. I turn the dazzle inward

and down. It courses through the veins

and lofts me toward the breathless light.

I'm loving all these poets you're introducing us to, Kay!

Beautiful imagery and heartbreaking, too.

When I talked to Mr. Abbott not long ago, I told him about a photograph that made me cry. I said that if any of my art moved someone to cry, I would feel it was a great accomplishment. I had no idea who Mr. Abbott was (I only knew him as my employee Tony's uncle Tony.) Then I read his "The man whose mother was a boy." It was an analogy, a summary of my life. In one small page, in beautiful words, he succinctly expressed my feelings. He is not a woman. How can he know. He is a poet, a great poet--that is how.